Happy New Year!
Wishing everyone All the Best!
Posted by Pampered Pets Guide at January 01, 2010

Blue Moon this New Years Eve
As 2009 comes to a close there is a special treat for everyone this year. It is not every year that one can see a Blue Moon.
Tomorrow January 31st 2009, the last night of 2009, a Blue Moon will appear to Welcome in the New Year.
Don't miss out on seeing this wonder of nature.
It will be cold but well worth bundling up for a moment to step outside to see the Blue Moon.
Posted by Pampered Pets Guide at December 30, 2009 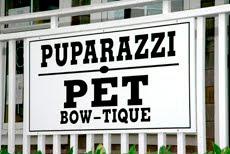 First Friday Dog Party is at Puparazzi! Pet Bow-tique located in the town of Manteo on Historic Roanoke Island Friday, Jan 1st 2010.
This is a monthly Outer Banks Pet Event scheduled the
First Friday of each Month 5pm - 7pm
This Party for Dogs, has a Different Theme each Month with Treats, Prizes & Fun things to do.
Posted by Pampered Pets Guide at December 28, 2009

Princess Jezibelle and the Gift of Giving 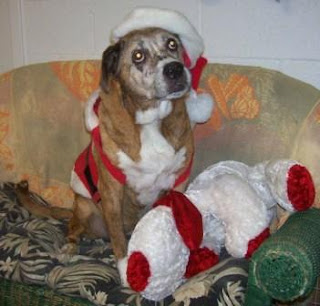 Princess Jezibelle and the Gift of Giving
Last December the Animal Control officer brought a pitiful looking senior dog into the office of our Currituck County Animal Shelter, shook his head and, as he handed over her leash to the Shelter Manager, remarked what an easy stray she was to catch because she couldn't run; she could barely walk.
As the Shelter Manager, Laura Marquette, began to make out the new stray's paperwork, she noticed the broken and missing teeth, cataracts, a limp in her arthritic back legs, and that she had only half of one of her ears.
When she looked back at the new arrival again, she realized that this unattractive looking dog was giving her a smile -- a crooked but big smile! Laura needed to put a name on the records. Mischievously, she chose Jezibelle.
There was no room in the shelter, so where could this new arrival go? Jezibelle looked around the office, checked out a couple of spots, including the bathroom, and selected the cushioned wicker couch in the front lobby/office!
As staff came through the lobby and paused to pet her, she gave each an affectionate kiss. Scratching her back brought that engaging crooked smile and a big tail wag. The staff was smitten!
The next day one of the regular dog kennels in the rear of the shelter became available and Jezibelle was moved into it. The following day she began to tremble and shake, wouldn't eat, and appeared to be quite sick. It was the Shelter Manager's day off but she was moved back into the lobby/ office where she could be more closely observed. She immediately reclaimed her spot on the cushioned wicker couch.
Whenever a staff member would approach her, she again began to shake and appear to be sick. Not wanting to upset her, when it was time to leave for the night our thoughtful staff members picked up the couch with Jezibelle sitting on it and carried her, as if she were the Queen of Sheba, into the coziest room in the shelter, the bathroom! When the Shelter Manager arrived the next day and examined Jezibelle, she found that she was not sick at all. Jezibelle had manipulated the entire staff into returning her to the center of activity where she could meet and greet and get petted by all who entered what she had now claimed as her fifedome,the shelter lobby!
Months passed and no one seemed to want to adopt a friendly 12 year old dog with a gray muzzle, broken and missing teeth, cataracts, part of her ear missing, and limited mobility. From the outset Jezibelle had taken it upon herself to become the official greeter and mascot of the shelter.
Anyone who entered, human or animal, got the crooked Jezibelle smile and a friendly lick or kiss. Her days were spent divided between greeting, surveying her subjects, and sleeping on her couch in the lobby office. Evenings were spent unsuccessfully searching for dog treats. One morning the staff walked in to find one of the treat boxes empty --and Jezibelle smiling, wagging her tail, and giving a big burp! Treat boxes are no longer left on the Manager's desk at the end of the day.
By Father's Day Jezibelle had completely endeared herself to everybody and, because she surveyed most of the days' activities from the vantage of her couch throne, she gained the title of Princess Jezibelle. For a special Father's Day Adoption Weekend, it was advertised in the newspaper that anyone who came to the shelter to adopt a pet could adopt at a discounted price if her highness Princess Jezibelle deemed a person worthy of her favor and licked the person's hand.
If she greatly approved of the adopter by favoring him with her kiss on his cheek, she decreed that one of her specially selected stuffed animal toys would be granted to accompany the adopted pet. We had a good weekend and Jezibelle, of course, licked every hand and gave everyone kisses. More animals than usual went to new homes that weekend, but not Jezibelle.
Some of our young animal lovers collected items for our shelter animals from their neighborhoods or had birthdays celebrated by young friends bringing gifts for the animals for the birthday celebrant. There to greet each child and check out their lobby filling treats and give a lick of appreciation is Jezibelle, complete with her sun shade and sun glasses to help with her cataracts.
A recent trip to the veterinarian has brought her some increased mobility thanks toprednisone. This is a dog who is living out her life as she may have been destinedto live it -- by giving the most important gift of all to to everyone she meets --the gift of joy and love!
Photo & Article
Ginger Sikes, President
Animal Lovers Assistance League
Posted by Pampered Pets Guide at December 27, 2009
Newer Posts Older Posts Home
Subscribe to: Posts (Atom)